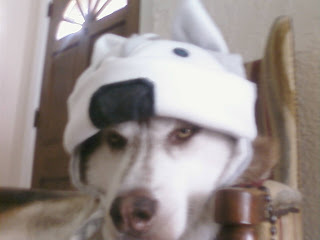 A rare glimpse of me and Kiley singing a song in unison.
Of course as soon as I realized the camera was out, I immediately clammed up and hid!
Simcha
Posted by Simcha at 7:34 PM 8 comments:

We Go Out Walking, After Midnight

Folks are always asking, how do two snow dogs do during the summer
living in Virginia?
I admit. It does get hot. Today's high was 98 degrees and at 10pm
it was just under 90 degrees.
Way too hot for a husky dog.
Don't you agree?
So for tonight's walk, Humom loaded us up into the Siberian Transporter. (aka the Mal Mobile).
We drove to our favorite local beach for a midnight walk at Chic's Beach!
Chic's beach is on the bay side of the oceanfront and it runs under the massive Chesapeake Bay Bridge Tunnel.
We took tons of pictures but because it's so dark, many didn't come out.
But we will share with you the ones that did.

Here you can see me and Kiley walking along the water just under the bridge. The water is as warm as a bathtub.
While Kiley's favorite thing to do is swim, there is one thing on the beach that I love more than anything.
CRABBING!

There are hundreds of crabs scampering all over the beach! I spend my time hunting them.

Here's Kiley running out of the water. She was just bombarded by an enormous wave!
And last, I will leave you with a picture of the Chesapeake Bay Bridge Tunnel. It's pretty awesome

(PS. We did not take the last picture. It's from the Chesapeake Bridge Tunnel website
Simcha!
Posted by Simcha at 1:31 AM 7 comments: