Dim Sum with a side of soy sauce 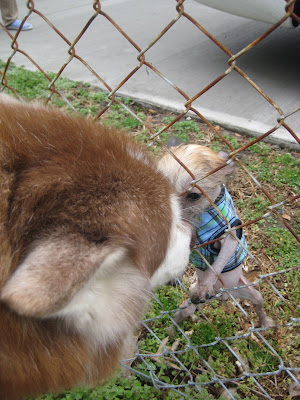 This is Ozziemonster.
The Chinese Crested!
My "almost" new neighbor!
He was bought by my neighbor's son as a gift for his mom for her retirement. Lucky for us pups, the son fell in love with the hairless pup and decided he will stay with him.
Ozzie is 14 weeks old and weighs almost 3 lbs!
We are glad for Ozzie sake, he is only visiting his grandma and will not be staying.
I love and licked the little guy.
But we were worried for his safety with my sister Kiley being around.
Thanks for visiting and have a great weekend everyone!
Simcha
Posted by Simcha at 1:36 PM 10 comments:

Nigel has been FOUND!

Not sure how many pups are following the "Toughest Race on Earth", but in case you didn't know, the Iditarod has been going on since last week. We have been glued to the computer and blogs looking for news out of Alaska.

Here at our house, we have been worried about a sleddog named Nigel.

Nigel, one of Nancy Yoshida 16 sleddogs, was recaptured on Friday after running around in the wilderness for almost 3 days!

Nigel went missing when his musher, NancyYoshida, tied him to a tree after a horrific sled crash. She unhooked him and expected him to follow her down the gorge. Yeah right! Have you seen his picture? Is he not a husky? 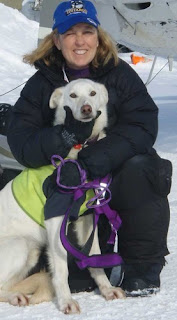 Instead of following her down the mountain, Nigel gave her that "C'Ya" look and took off. I would have done the same thing. According to Alaska Daily News, the last time Yoshida saw him was Tuesday morning when he came running down the steps in front of Colorado musher Kurt Reich's lead dogs. Yoshida grabbed a handful of dog food and called for Nigel, but he didn't come.

HuMom can so relate to this. It's all a husky-game. The last time I was loose, I came running out of the darkness and buzzed right by my Humom several times.

Nigel was found on Friday the 13th! His lucky day. Search parties on snow machines had been out looking for him but he finally was coaxed out of the wilderness by owner's of an inn.

Nigel was finally reunited with his musher, who was flown in for the occasion. I hear there were lots of tail wags and snoooter kisses.

I was thinking maybe his musher was in shock after her sled crashed. I am not saying it was a stupid thing to do. But to borrow a phrase from my friend Khyra, I'm just saying...

So now we can continue watching our race now that Nigel has been found. See you in Nome!

Just Me and My Mom

Before heading out to Raleigh NC, our HuDad took us to the dogpark to shake the sillies out.

When HuMom came home from work, she realized Kiley was limping. With all our running around today, Kiley must have blew a hammie. So she gave Kiley a tramadol and Kiley headed off to bed.

Which means I get HuMom all to myself 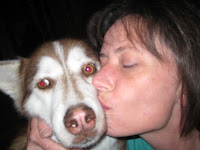 In honor of our friend Zim, we decided brave the icey bridge tunnel system and drive to our favorite area park in Newport News.

Now that it's March, we now there are not too many walking days left as soon the summer will be here with the intense heat.

We had a different video picked out but for some reason we were unable to upload it. Will try again tonight.


Please excuse the spastic voice of my Mom. She hasn't seen snow in 4 years! Enjoy our video and thanks for stopping by.

A Very Happy
Simcha
Posted by Simcha at 12:04 PM 9 comments:

Apparently I missed the Party 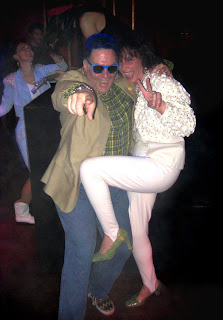