HuMom was doing some internet shopping when she came across this item (mouse pad) from Cafe Press! My beewoootiful face adorns the mouse pad amongst the collage of other Sibe rescues. WooT!

HuDad down with the kennel cough 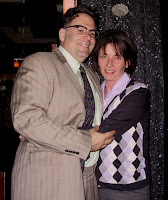 My HuDad is delicate. HuMom is not calling him a wimp but we often hear HuDad complain "I think I'm fighting something off" so much that it rarely phases us. Of course, if me or Kiley sniffle, it's off to the vet we go. Totally unfair. However when HuDad complained this weekend that "I think I'm fighting something off", HuMom should have listened.

My HuMom works 12 plus hours on her feet. Her and my HuDad have an unofficial rule, the nights she works, he walks us dogs. Last night when she arrived home at 12:30am: I let her know right away that HuDad hadn't walked us. I did an extra special dance of the deserted Sibe when I greeted her at the door. HuMom immediately asked HuDad, who was sitting on the couch playing solitaire and watching TV, "Did you walk the dogs yet?" To which HuDad replied with the ubiquitous phrase " No, I think I'm fighting something off". HuMom immediately gave him the disapproving look that she only gives me when I do something wrong. She was thinking "Get your lazy ass off the couch and walk the dogs". HuDad obediently got up, leashed us up and headed out the door for our nightly romp. HuMom didn't feel bad for him even though it began to rain.
When we returned from our walk, HuMom (who thought HuDad was just trying to get out of walking us) told HuDad that if he's sick, he needs to go to the Dr's.(IE: she's heard people whine at her all day and the last thing she needs is to come home and listen to HuDad whine) Sometimes, she's not very nice.

HuDad went to the hoooman doctor this morning and called HuMom from the office. They did an xray and HuDad has pneumonia! PNEUMONIA! That's like kennel cough but much worse. Poor HuDad.

I heard HuMom hang up the phone and say under her breath "he better bring home a Dr's note". Poor HuDad. I hope he feels better soon.

HuMom and Dad went for a mini vacation to Charleston NC leaving Kiley and me the house. We had Kelly, our favorite dog sitter come stay with us so we wouldn't be lonely. I love Kelly. She brings her boyfriend who used to live in Alaska and he adores us snowdogs.

Being a Jewish dog, the one thing I'm good at is laying down the guilt. As soon as I see the suitcases come out of the attic, I begin to mope around. This technique is so effective, that HuMom begins to panic and wishes she wasn't leaving. One of these days, she will take me with her.

The HuMom is a strange creature. Each time she leaves, she goes into panic mode and stays up all night cleaning the house and ridding every crevice of dog hair. Yeah, like we really live this way. What's a little dog hair?
Posted by Simcha at 8:39 AM No comments: 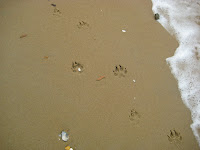 For Hu-Mamma's special day, I thought it would be a good idea if we all took at walk on the beach.. Got to love cloudy days. The beaches are empty of hoooomans but perfect for Siberians and Malamutes.

Momma, me and Kiley actually spotted a FOX on the beach. Probably taking advantage of the deserted conditions and plentiful food (SEAFOOD).

My human became nervous as she wasn't sure if the fox was supposed to be on the beach. He didn't look sick but what if he had Rabies. 10 days of house arrest for quarenteen is not my idea of fun.

Enjoy our pics on the beach. I love my Momma


Enjoy our beach pictures. I love my Momma
Posted by Simcha at 8:30 PM No comments: 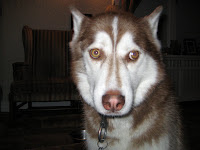 My name is Simcha. This is me. I have taken over the computer and my Hu-mom's boring blog about herself. I can't wait to start writing about my adventures.

I spend a lot of time staring off into the clouds, contemplating Sibe world domination.
Posted by Simcha at 12:14 PM No comments: 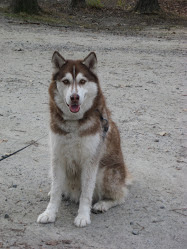 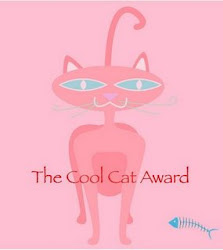